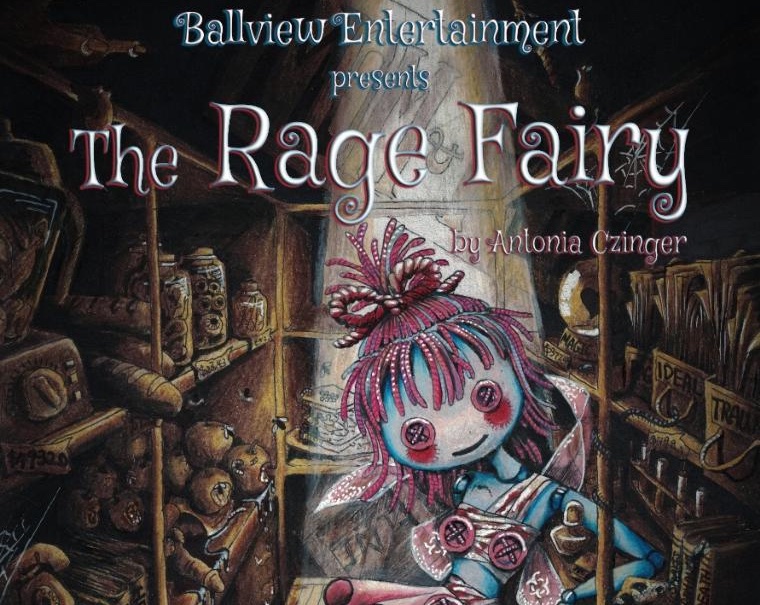 Written and Directed by Antonia Czinger

The Rage Fairy is a surreal comedy/horror/love story.  The fairy begrudgingly works in the sandwich shop of her human parents.  They care more about productivity than about her. She is one scary fairy with a plethora of mental health issues.  Talk about a fractured fairy tale!  Her customer service leaves something to be desired.  She’s a bit too T.M.I. with her rantings and ravings at customers which causes them to flee from the store.  She just longs to be loved.  Some women find Prince Charming.  The Rage Fairy found Dexter!  Yes indeed, she entered into an unrequited love relationship with a murderer.  He wears a bloody shirt throughout the production.  Along the way we meet an incredibly colorful and caricaturic cast of characters like a fortune teller and the murdered girls.  Is it a fairy tale ending?  Well, if you like Grimm’s Fairy Tales, you’re in luck.

The Rage Fairy was innovative and twisted.  The main character was reminiscent of Carol Kane’s demented portrayal of a fairy in Scrooged.  There were no garden variety characters in this show.  Everyone had a bit of crazy, none more than the fairy herself.  Hats off to Holly Anne Mitchell as the fairy.  She was on stage for just about every minute of the production and had to sustain an incredible amount of energy for the role both mental and physical.  Her wonderful portrayal can best be described as Tinkerbell on cocaine with a shot of whiskey.  Isaac Tipton Snyder killed it as the fairy’s…ahem…love interest and the murderer, pun fully intended!  Some very interesting standout characters were The Murdered Girls played by Ayanda Dube, Lauren Adlhoch and Madison Dubler.  They were the ghosts of the girls killed by the murderer.  They haunted the fairy on a nightly basis because of her relationship with the murderer.  These actresses had a lot of intricate work to do.  The murdered girls moved and spoke mostly in unison.  They were like a combination of ballet dancers, a Greek Chorus and the witches from Macbeth cast in a horror movie.  It was quite impressive how well and seamlessly they moved and spoke together.  They were deftly effective.  Every actor was well suited for their characters and did a great job.

Antonia Czinger penned a dark, demented and funny fairy tale.  The costumes were wonderful from the bloody shirt to the beautiful attire of the fortune teller.  The set was simple but the stripes on the walls gave it a dizzying funhouse feel which aligned perfectly with the surreal story.  The Rage Fairy earned its wings!