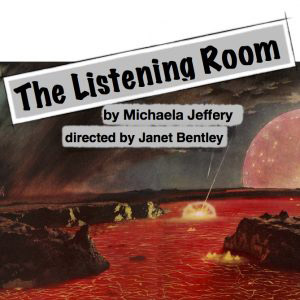 The Listening Room by Michaela Jeffrey, Directed by Janet Bentley

“The Listening Room” by Michaela Jeffery is a powerful politically-based fantasy that – if we’re not careful – could be reality.

In a forgotten society called The Earie, young seditious teens use radio telescopes to reclaim fragments of earlier civilizations still bouncing back between the stars. The “Listeners” have to fight against the pressure coming from the “Central Council” who “hold over the imaginations” of the society and buried the practice of “Listening.” Listeners begin to disappear. On the day of a “high profile disciplinary hearing” a blind girl named Isobel walks seven miles through a desert on her own to a place called “The Listening Room” where she wants to become a listener.

The dynamic cast included Danielle Boivin, JJ Condon, Bailey Newman, Skyler Gallun, and Sayvone Brown. We are transported to a sanctuary called “The Listening Room” that is apparently in the middle of a desert.

“The Listening Room” was inspired, unique in concept, deeply engaging, and well-suited for a reading (allowing for the forbidden imagination to kick-in). The narrative of the forgotten civilization and the hearing the fragments from earlier civilizations was a stunning idea. It connects to the concept of radio waves just screaming into the void for all eternity. This was similar to the plots to comedic space movies and TV shows but taking it seriously really was pungent. The actors made the book disappear and emotional commitment to prevail. The voice of the narrator added suspense and tension – like the old radio plays used to have.

How ironic that a voice hearkens us to when the fodder of the listeners first took flight.