A Therapy Session with Myself, a semi-autobiographical drama by Anthony J. Piccione about the inner struggles of living with mental illness and Asperger’s syndrome, premieres this January at the Hudson Guild Theatre, 441 W 26th Street, as part of 2019 NYWinterfest. Catch this powerful self-exploration on Tuesday, January 15 at 9 pm, Wednesday, January 16 at 6:15 pm and Saturday, January 19 at 3:30 pm. Tickets can be purchased by visiting www.brownpapertickets.com/event/3798842.

A Therapy Session with Myself tells the story of Alex Grayson, a young college student and aspiring writer suffering from severe social anxiety, depression and Asperger’s syndrome. During the summer before his senior year, he receives a mysterious visit from “himself”, a human incarnation of his inner consciousness. As they interact, Alex is forced to reflect on his own flaws and personality quirks, as well as some of the darkest and most painful memories of his adolescence, while also pondering the question of whether or not he can overcome his inner demons, and ultimately build a brighter future for himself.

We had a chance to chat with three of the cast members as they begin intense rehearsal. 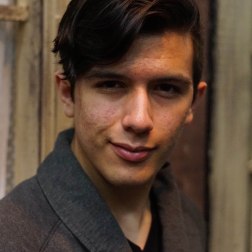 Tell us about yourselves as an artist?:

TRAVIS MARTIN: Due to a speech and language difficulty, I like to think of myself as a quiet actor. I’m interested in what a character doesn’t say rather than the dialogue. I am still able to do lines of dialogue (much better than talking in normal conversation), but I consider what other traits can be shown without talking. I am also a film writer, director, and editor, having made the shorts Afterthought and The Resident. I also wrote and self-published a book, Lion’s Heaven, which is currently on Amazon now.

NATHAN CUSSON: As an actor, my one goal has always been to tell stories that will outlive me and change the lives of others for the better. Sometimes that’s included portraying characters that carry distinct and textured backgrounds and other times characters that who in themselves aren’t exactly “friendly”. That’s the challenge I’m always eager to tackle as the more I learn about these characters, these people – the more I understand them and I feel I’m coming closer to achieving my goal. When audiences watch the stories I have the joy of being a part of, we have an opportunity to share a mutual understanding of who these people being performed are and how we can use this conversation between storytellers and audience to develop a fuller understanding of our world and, in response, make it a better one. That’s the goal.

LIZZY MORENO: As someone who received a B.A in Theater rather than a B.F.A I have always been passionate about creating art for change. Art that humanizes statistics. Art that pushes boundaries beyond the classic Chekov, Shakespeare, Williams, and Ibsen plays. In a globalized, yet polarized world it is even more important to have art that represents a diverse range of perspectives. My number one goal is to challenge and surprise audience members on their own capacity to empathize.
What does this play “say” to you? Can you relate?:

TRAVIS MARTIN: A lot of this play and what the main character Alex is going through internally, it’s almost verbatim what I have felt or gone through. The difficulties with verbal communication, the isolation, and the rage of being different and conformity, it was like every negative thought I had about myself was put in words. However, there are significant differences between Alex and myself: I went to a special needs school where I was taught how to overcome my special needs, I didn’t get physically bullied, I have a more spiritual and less cynical black-and-white view of the world, and I’m more lenient with changing some aspects of myself to fit with the world. When reading it, it was like looking in the mirror and seeing what it could have been for me if I didn’t have all the support and experiences I had. It made me wonder if I would have ended up with the same mindset if I hadn’t had the special treatments and adventures.

NATHAN CUSSON: Anthony and I had the pleasure of sharing a few years studying together – so I had some first hand experience of what this play addresses. I remember walking into a program thinking ‘Theatre is family.’ and walking out thinking ‘Theatre can be family.’ Both in professional and private social situations gossip, collective assumptions, and the ‘We’re not the a**hole, he/she is’. attitude are mob mentalities that perpetuate stereotypes and labels and burn bridges of conversation and unity. So in short, yes, I can relate. Today, the right environment can make enemies of friends in a time where we can’t afford to be divided any longer.

LIZZY MORENO: Who can’t relate to this play? It perfectly captures the multitude of perspectives you can have and the problem of not knowing which side to trust. It captures the every day grapple we have between what we think we should feel and what we actually feel. As someone who just graduated from a small liberal arts school this play resonates with me. Though small colleges provide a feeling of safety and a strong community, they also put you in a bubble and that same feeling of safety can easily metamorphosis into a feeling of restlessness and feeling emotionally trapped.

This play – as with all Piccione’s works – packs a punch. What is your process as an actor when you are involved in a piece with such subject matter?:

TRAVIS MARTIN: Despite similarities to what Alex and I felt, it was important that I focus on how my characters were in the moments, rather than focus on the entire play’s narrative. While do read the entire play, I focus more on scenes that I am in to deconstruct my characters. For Henry, it’s about being a social butterfly and trying to connect with someone like Alex. Meanwhile, the patient I play is basically a volcano that’s already erupted and is now trying to cap it. However, there are leaks of lava that occasionally burst out.

NATHAN CUSSON: First and foremost, it’s important for an actor to respect the text and the heavy thematic topics it covers. Especially when it is based on personal experience and so many issues we face as a culture of people. As far as the punch, I try to embrace the characters and the subject matter for what it is and then do my best to find out what motivates it all. Constant work to know and understand the material helps me prepare myself to develop that sort of atmosphere I know the cast and creative team are hoping to create.

LIZZY MORENO: My theater adviser always told me “You find universality through specificity” and for this piece in particular it is super important to not play a stereotype. Even specifying the personality of the bullies or other students add dimension to Alex’s story. The conflicting objectives between each character are better highlighted when you treat each role as an individual and not simply only exposition to the story.

Tell us your thoughts on independent theater – what purpose does it serve both to the artist community and New York audiences?:

NATHAN CUSSON: Independent theatre artists are the pioneers of new media through storytelling. It allows artist communities to work styles that are not traditional and create new work that paves roads with inspirational and revolutionary work for new and old artist alike. Also, of course, allowing this type of work to be informing the audiences that populates the greatest city in the world also has it’s perks.

LIZZY MORENO: Independent theater artists are essential. They are the future. They’re like the Netflix TV shows to cable television. Broadway does not want to take many monetary risks. Hence an overproduction of Disney musicals or movies being turned into musicals. People recognize the name so ultimately they can take a safe bet that they will do well. However, independent theater does not need to fear failure and therefore can take so many more risks. Independent theater provides an unfiltered platform for new art to explore topics/themes.

What’s next for you?:

TRAVIS MARTIN: For acting, don’t know. I am finishing the sequel to my book Lion’s Heaven, which I’m trying to have out sometime in January. Otherwise, I’m working as an editor for the Youtube channel ScreenPrism, editing a short film for a friend, and working on some scripts while finding my next gig.

NATHAN CUSSON: I only just moved to New York a few months back but I’m hoping to well, you know, ‘make it.’ Between background work, theatrical performance, and building up my professional portfolio, I’m excited to tackle the city head on and break into the Film/TV and Theatre business. I’m also currently working on a full-length play entitled Love, La Familia that I’ve been speaking with Anthony about. Hopefully it will meet audiences for a New York debut in 2019. Aside from that, I will do as all the starting actors do: work, look for representation, and wonder how much crazier my life will become – laughing all the while.

LIZZY MORENO: I will be performing in a developing musical called Humanity’s Child at the Hudson Guild Theatre (again) this summer for the NYSummerfest.