Gogol’s classic story, powerfully brought to life by film and TV notable, Ilia Volok, explores – in stunning detail – the fine line between dreams and delusions and the loneliness they create. Audiences around the world have watched as Volok became an everyman plummeting into insanity over this woman until – thinking he is now the King of Spain, Poprishchin’s only destination became an insane asylum.

Volok’s deeply moving journey as Poprishchin, a clerk enamored by his boss’ daughter – who doesn’t know he is alive – from simple desire to obsession and madness has been praised across the country and across the world. Volok presented his magnum opus at Dubai’s Junction Theater,Theatre de la Huchette in Paris France, In London England at the Brunel and Sands Studio Performance spaces, in Zurich Switzerland at the Kaufleuten performance center as  well as winning praise on the West Coast and “where it all began” in Ukraine-at Kiev’s Suzirya Theater&Stage 6 and at the Odessa Independent Theater 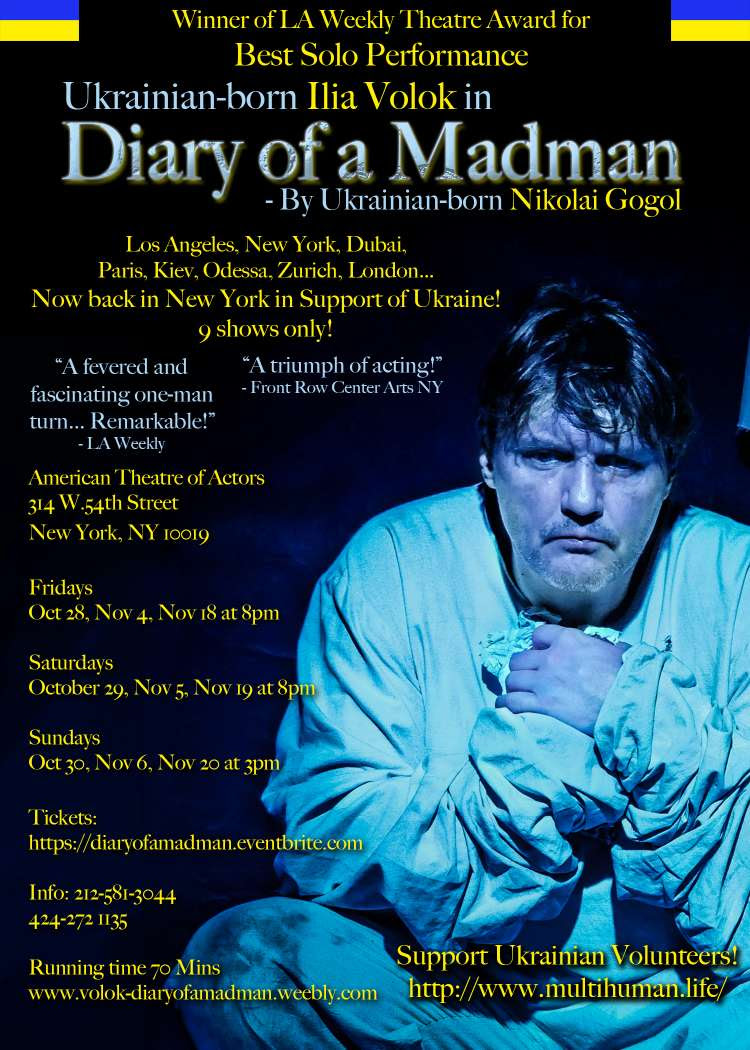 Currently in New York to film a television series, Mr. Volok decided to use this as an opportunity to present this solo work where he first premiered it in NYC, at American Theatre of Actors, one of the last great theatres of the off-off Broadway movement, Volok returns for a limited run starting Halloween weekend.

Volok’s MADMAN has performed all over the world:
New York, Los Angeles, Dubai, Paris, Zurich, London … even Kiev and Odessa!

“…A triumph of acting for Ilia Volok! … a performance of beauty and intensity.”
Holli Harms Front Row Center Arts 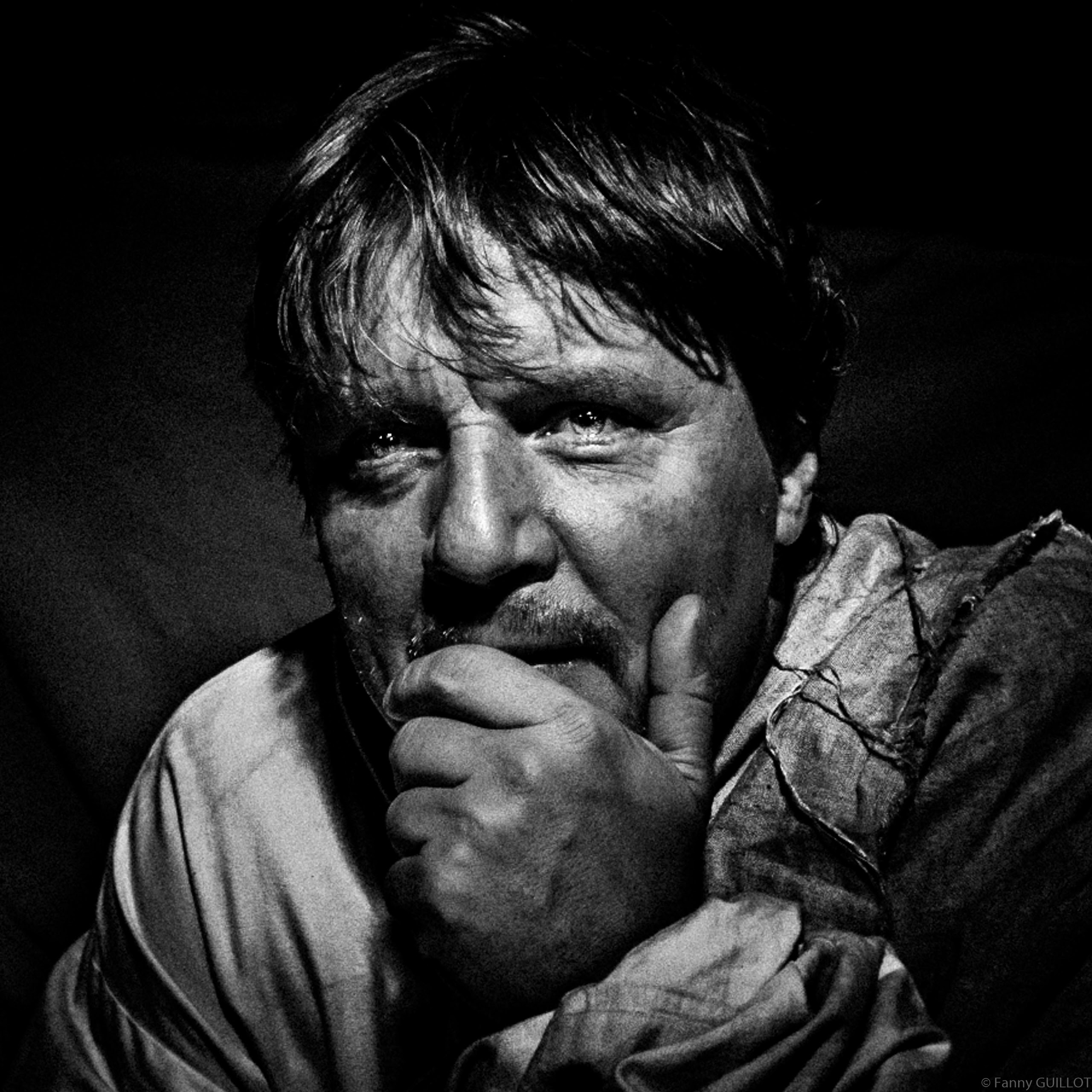 “For a single person showcase it doesn’t get any better than this!”
Rich Borowy, ACCESSIBLY LIVE OFF-LINE 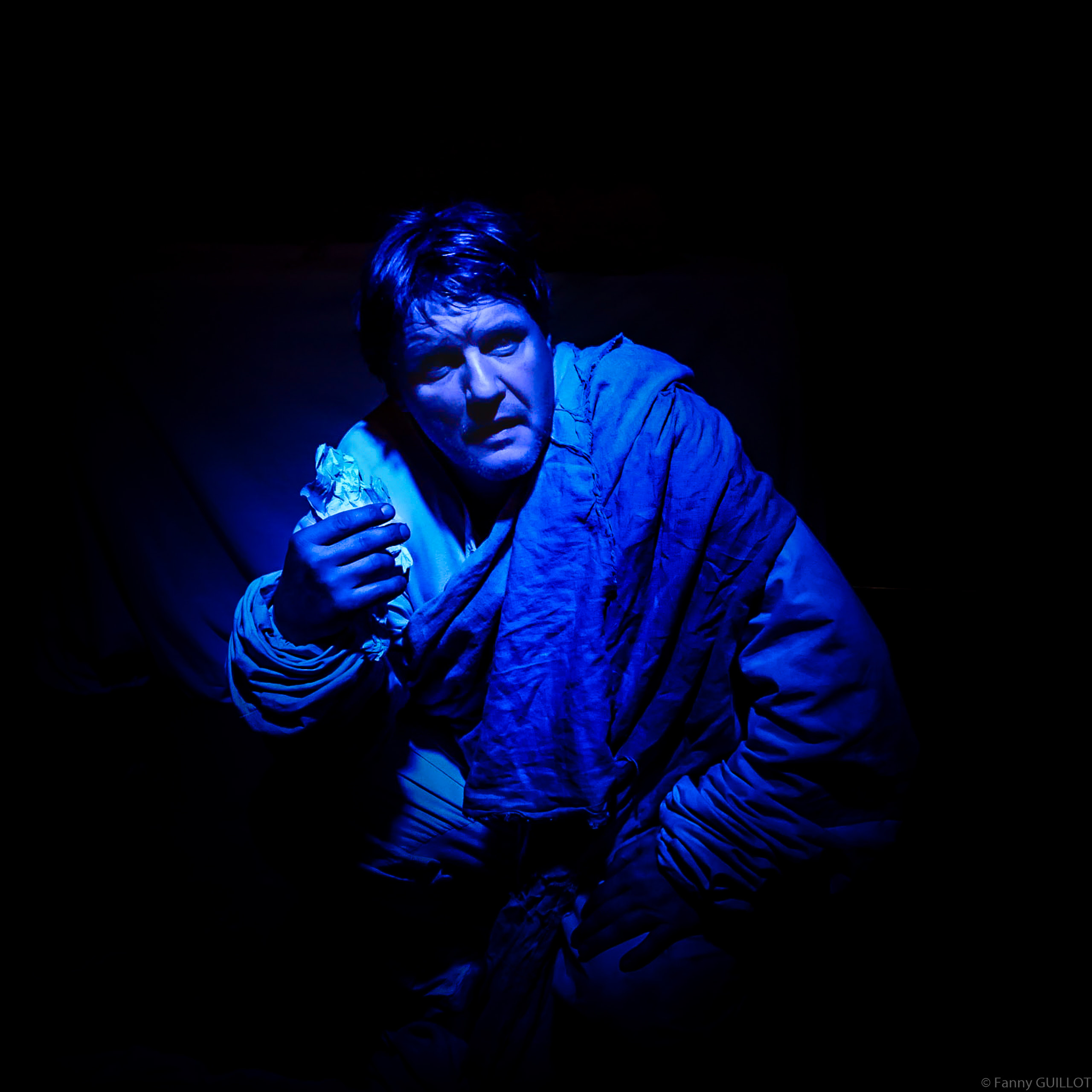 “… Keeps the audience captivated and entertained throughout. It takes a great actor to bring that type of character to life and Mr. Volok deserves to be commended for his success in doing that.”
Anthony J. Piccione OnStage Contributing Critic 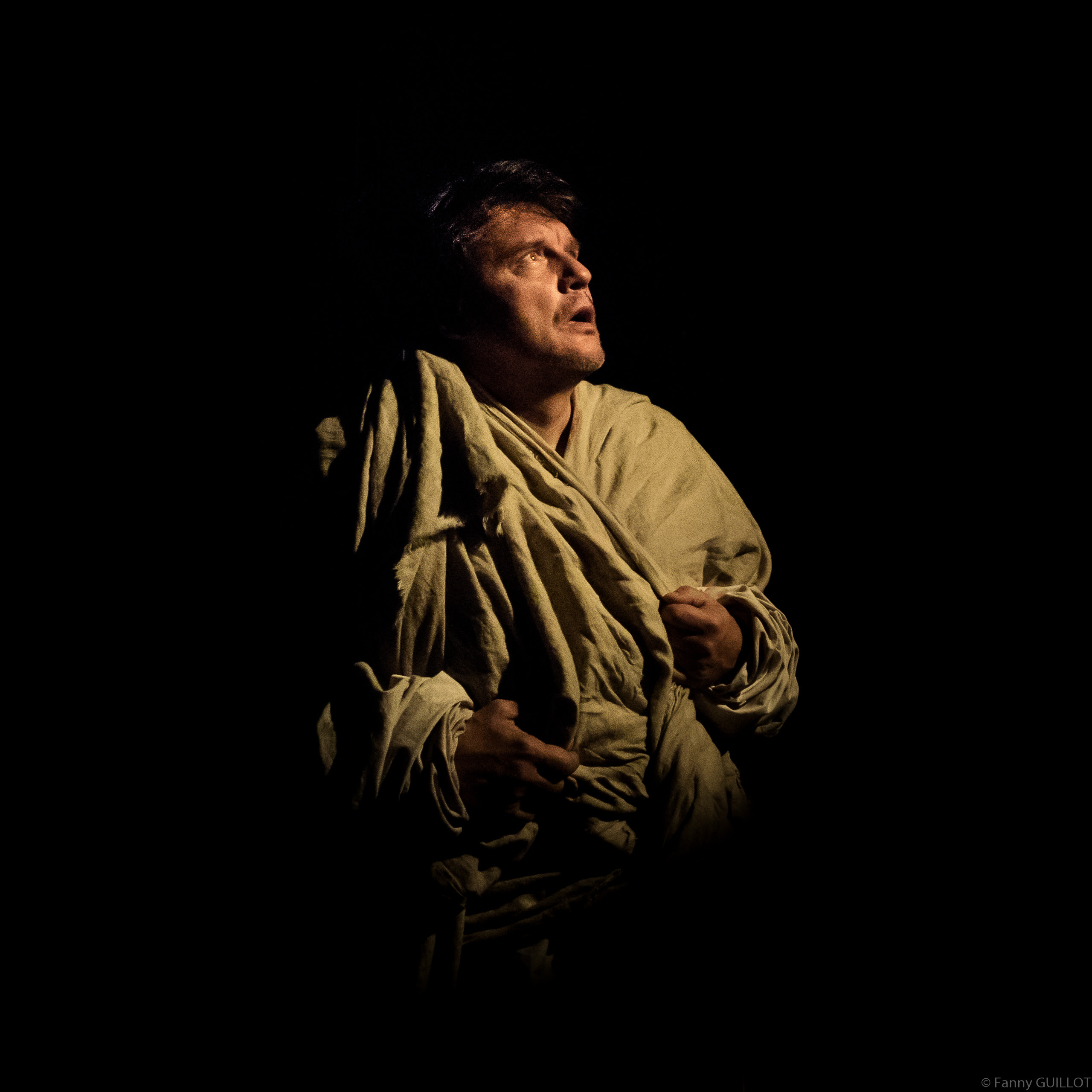 “Volok’s commitment to his character is unimpeachable. Every glance, movement, sound, word, laugh and cry of his severely troubled tale is rendered with palpable pain as well as the innocence of truth.”
Charles E. Gerber, Splash Magazine Worldwide

“…An absolute must-see,  with a performance by Volok that is so riveting that as his insanity escalates,  he maintains a powerful core that never dissipates.””…This talented actor takes on the adaptation,  written by Nikolai Gogol,  with an intense range of emotions,  both scary and,  at times, surprisingly tender.”
Bonnie Priever, Examiner 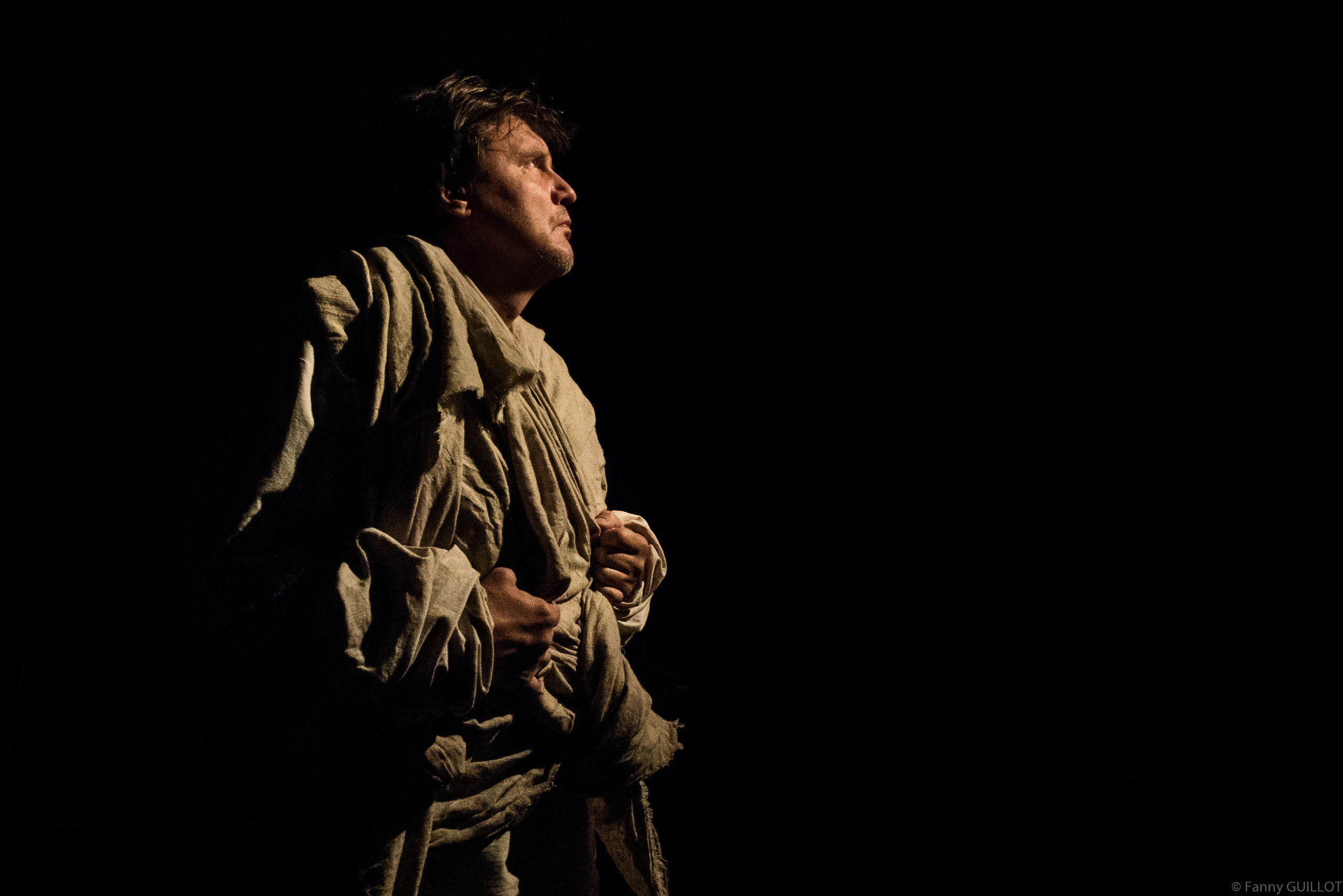 “…Diary of a Madman is a bold and unique actor’s showcase and a performance well worth attending…”  “…The tour de force performance delivered by Volok…”  “…Unwavering devotion to the character….”    “…Volok is gripping,  endearing and steadfast in his role…”  “…Diary of a Madman succeeds primarily due to Volok’s fully committed performance.”
Robert Lilly, LA Stage Happenings