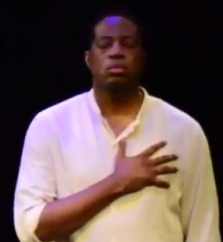 A Review by Isaac Scranton of S.U.N. IN THE U.S.A. by Michael Hagins

American History is in the headlines these days, with race relations currently front and center in the discussion of our national legacy.  In that milieu, S.U.N. IN THE U.S.A.by Michael Hagins at Theatre Row presents an hour-long historical review, giving the audience familiar sights and scenarios from a new point of view.

Following the centuries-long journey of the main character, known only as “Black,” endures hardship after hardship, from being kidnapped from Africa for the American slave trade, to being openly abused by slave-owners, overseers, and Union commanders alike throughout the major periods in American history.  As he faces additional antagonism with 1920’s Prohibition curbing his attempts to make an honest living, pro-segregation rhetoric in the 1960’s and police violence in the 2010’s, we as the audience get the feeling that his long march towards freedom is taking far too long.

With each episode in Black’s journey, we hear the same supposedly comforting talking points from the surrounding characters, cajoling him to accept his lower status.  We palpably feel both his indignation and his trauma as he faces inhumane treatment again and again at the hands of supposedly well-meaning authorities.

Drawing on American theatre traditions, particularly Vaudeville, silent films and minstrel shows, Black, played mutely and unstoppably by Duane Ferguson, keeps the audience riveted with his every glance and movement, shocking the theatre in his final scene, when he utters his only lines of the one-hour play, “I can’t breathe.”  His poignant responsiveness to the situations he is put through is humanized greatly by the musical chorus that follows him on his journey (played by Alexandra Doering-Dorvial, Kofi Mills and Gigi Principe, in full minstrel whiteface), harkening, a Capella, traditional and modern African American tunes to ground the audience in each episodic time.

This chorus is Black’s sole comfort.

Populating this cruel and hostile American world that Black lives in are a whole slate of familiar white antagonists, including various Klansmen and officials, along with real historical figures such as Confederate John C. Calhoun and segregationist “Bull” Connor (both played by Michael Whitten), violent slave masters and police (played with great realism by Tucker Daily Johnston) and, of course, various “neutral” characters such as the Northern Shop Keeper and Union Colonel (played by Jeremy Goren and Michael Pichardo, respectively) who profess their support in words for improving Black’s lot while, in action, merely adding to his plight.

By far, the most chilling characters, though, are the women in Black’s centuries-long life, who alternatively fetishize him, ostracize him, gaslight him or actively call for his brutalization.  Tiffany Knight, as the slave owner’s daughter, is perhaps the most terrifying, as she mixes playful seduction with overt threats of blackmail and violence to bed Black, while Mary Sheridan, as his 21st Century white girlfriend, plays a remarkably stark parallel as just another white woman out to show off a woke status symbol.  In both cases, Black is treated more as property than as a person, showing how little has really changed over the years.

While the Prohibition lady, played by Beth Griffith, seems the most earnest of the bunch in her intentions to improve the world, regardless of skin tone, Alaina Hammond, as the now classically stereotypical Karen, slams home the idea that, no matter how much Black’s lot in life improves, there seemingly may always be a white person around to set him back.

Through repetition and a condensed time frame, the audience is shown, plainly, how the same basic talking points that once underpinned slavery and attitudes about the White Man’s Burden remain a constant thread in the American experience.  Abused people are told they should be grateful for their treatment, freedom for all is shown to be only freedom for some and, through it all, a stoically silent Black man and the choral spirits that accompany him keeps marching on, hoping to, one day, finally breathe again.