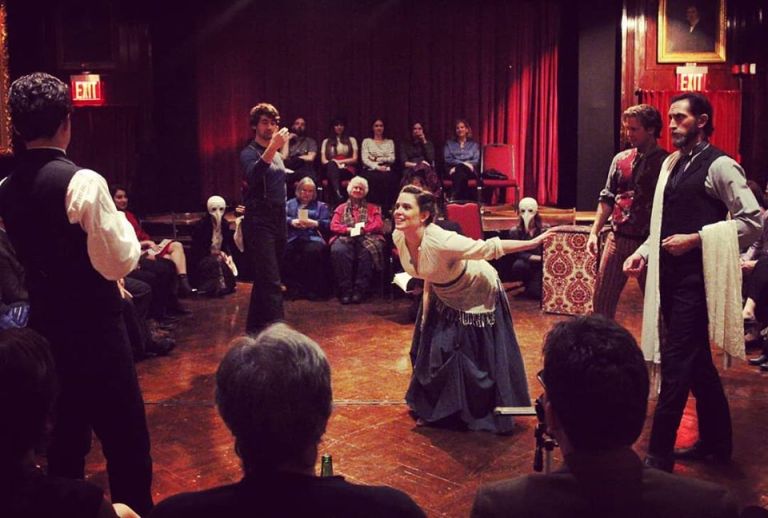 Casey Wimpee’s play, “The Brutes” has truly been on an incredible journey. Starting off  in 2011 as part of a larger idea to write a trilogy of plays centered around “American Brothers,” it has very much become a powerhouse in its own right. Following the famous Booth brothers as they prepare for the only production they ever performed in together professionally, the play began with a 2013 staged reading at the New Ohio Theatre and then was mostly put aside due to conflicting projects. It wasn’t until late 2017, when Adam Belvo (who had read as John Wilkes Booth in the reading and later played Edwin Booth) and Sara Fellini of spit&vigor began discussing re-vamping the show for them to produce. Wimpee sent them a new and improved script and the team got to work, producing the show at both the 2018 Planet Connections Festivity and back at the New Ohio Theatre. Little did they know that a descendant of the Booths themselves would be in the audience and would offer to let them perform at The Players Club, the old home of Edwin Booth himself.

“After meeting Paul & Jan Valle the final weekend of our run at the New Ohio Theatre” Belvo says. “we were invited to meet with them at The Players in March of this year. Paul is the great-great grandson of Junius Brutus Booth Jr., played by Nick Thomas in our production, and a member of The Players. During our first meeting at the club, they discussed with us the possibility of producing the show at The Players on Gramercy park; the rest, as they say, is history.”

It’s not hard to see the parallels between the rather tense Thanksgiving dinner shared by the Booth family and our current political climate. In the poignant scene, the family sits around the table at Thanksgiving and discusses the current Civil War. Of course, things get heated as John Wilkes possesses a different and much more aggressive opinion on the matter than his siblings. The ensuing argument is not unlike a holiday dinner that we might see today. When asked about these similarities Belvo said “We would hope people would see a play like this and immediately realize they are seeing aspects of the present time reflected; these issues are still alive today. It also fits with our general mission; we are committed to producing theater that brings people together and challenges them, intellectually and emotionally. “

Of course, performing a play about the Booth family in the legendary home of Edwin Booth was a once in a lifetime experience for the creative team of “The Brutes”. Belvo described the experience in the following: “Performing as members of the Booth family for the actual Booth family in the house that Edwin Booth built was a dream, an honor, and a great privilege. Words cannot describe how incredible it felt to perform this play for the descendants of the people we were playing onstage, it is easily a career highlight for me.”

Actor Nick Thomas echoed this sentiment when he said “Performing as Junius Booth Jnr. to a room full of Booth descendants in the home of Edwin Booth was a “perfect storm” and an experience you can only dream of as an actor.  spitnvigor has been lucky enough to spend time at the players club, there is so much history there and you cannot help but be inspired. Not only that but our audience prior to the show had toured the venue, visiting Edwin’s room which remains untouched on the top floor.  All of this together and you could feel the electricity in the room and on the stage and I think everyone there knew they were part of something special.”

A project rooted in such history requires quite a deep research process. All members of the creative team had to really dive into the history of these people in order to bring them to life in the most honest way they could. “Casey started working on early conceptual ideas for this play back in 2011” Belvo says, “he read more books, articles and history on the subject than I could possibly list.” While there are fantastical elements and things added to the script to better suite a theatre audience, it was important to everyone involved that the core history remain as true as possible. Belvo continues, “While he creates situations and scenarios to envision what may have happened and also writes dream sequences that take place in liminal spaces to convey emotional information, the actual history in the script is accurate and forms a foundation for the actors to begin work.”

As we know, the Booth name has become synonymous with John Wilkes and the assassination of Abraham Lincoln, so it was difficult for many of the actors to find information on the other members of the Booth family. Nick Thomas describes some of his difficulty with this particular research: “I started by researching Junius Jnr online and found such little information about him it was startling… Junius, June, Asia and even Edwin have become somewhat lost to history so to be able to give them a place to breathe and live again and for that place to be at the Players was  wonderful.”

Having been working on “The Brutes” for many years now, the cast and creative team have become very much a family. The excitement of getting everyone back together for a performance in Edwin Booth’s home could be felt throughout the room. “We spent the first 15 minutes of our reunion rehearsal greeting each other and catching up.” Belvo says. “The truly magical moment came when we started the line through and everyone fell right back into the script as if we’d taken only a week off instead of almost 10 months.” It was clear to see the magic of the space only helped this feeling. Belvo goes on to say that “We found that this time around we were able to really delve into specific moments of the play and really flesh the piece out more. We not only started where we left off, but by the time we arrived at The Players we had added depth and color that we had not found in our run at the New Ohio Theatre.”

When asked about any last thoughts on the show and the experience at The Players Club, both Belvo and Thomas expressed a great gratitude for all involved and hopes for future life for the play. Belvo, expressing particular gratitude towards the show’s director, saying:

“I’d like to point out that this play really came alive in the brilliant and deft hands of our director, Sara Fellini. Her ability to pull the action out of every moment, help actors discover characters’ intentions and keep the pace moving at dizzying speed is unparalleled and the key to this production’s success. Sara’s genius as a director is to focus on what matters the most onstage: playable actions and the motives and drives contained within the script. Her deft, gentle touch and perspicacity truly brought THE BRUTES to life, and I’d like to acknowledge that.”

Thomas’s response was just as enthusiastic: “When and where can you do this again! I love this show, I love this group of actors and truly believe it’s an American story about a very real and relatable American family that should be told and re-told again and again.”

It is clear that a lot of love and passion went into “The Brutes” and will continue as long as the show has a life. Hopefully some of the magic of performing in the home of a Booth will carry with them in throughout future productions.