Filled with gallows-humor, song, dance, and multi-media, each episode shows how abdication of a portion of human existence pulls a piece out of the house of cards that we call our lives. 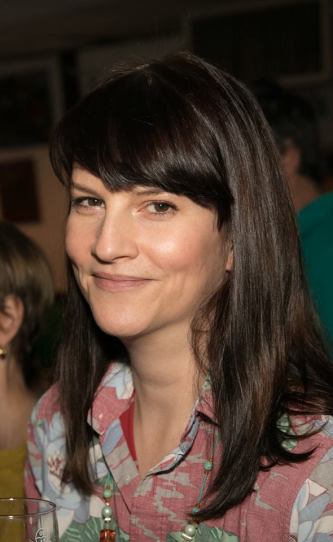 Moving up the ranks to “Indie Celebrity Status” is Meredith Rust. Scoring kudos and awards for performances at theaters such as the American Theatre of Actors, Meredith is known for powerful performances, a joyous attitude, and always being a consummate professional. Here’s her reply to “tell us about yourself as an artist.” Case closed.

“Acting, creating a scene, or a play, it’s about creating a character who is a real person, filling in the lines, and sometimes, drawing outside of them too. (It has to be a real person, because we are all real people, therefore incapable of playing anything but, right?) A great writer give you the palette to paint the story and the characters, inside your mind, to then transmit your interpretation to the audience. The director molds the story in service to the writing, and their vision of just how great it can be. The writer, actors, and director, as a team, make it the best they possibly can. And if you always put the best material you can out there, you are living your dream. Creating in general, and specifically acting, is being a conduit for whatever the material and spiritual worlds are presenting to you in the moment, to put the two together into a unique, momentary, fleeting art form, using the body and voice as your tool. I feel as though we create our lives, we attract what we want, even if it is subconscious. We play roles we need to play for our growth, and every part, every story we partake in, teaches us a lesson we need to learn at that particular time in our lives. Even if no one ever sees it, or just your class of 7 people. It can be a catapult to get you to the next part, or the next project, but maybe more importantly, to grow as a human.”

I start by envisioning the world created by the writer. A whole world can live in your head, and once you get together with your fellow actors and director, you start bringing the imagination to fruition. Others see things you don’t, and vice versa. It’s starts becoming a blend of everyone’s ideas and influences, and grows from there. As long as you believe it, the audience will too. It’s really limitless. You can keep finding new things every time you perform the piece.

Staying the course is also part of her philosophies.

If you play the reality of the situation, the humor can come out, and the play stays on track. You might have to leave a small space for laughter if you get lucky. But stay with your character and their reality. So often the funny things are so ludicrous that the joke is lost on the character, but not the viewer.

Discussing the fantastical element of the show became easy for a Trekkie.

“If you can dream it, you can do it.” I hope to be dead before we all have chips in our heads.  I’ve never been much of a horror fan. It shines a light on the darkest places in our psyches, and it’s scary! I don’t really like being scared. I’d rather stay with the good energy. Thrillers are about as far as I like to take my viewing. As a Star Trek fan, science fiction is sometimes scarily prognostic. That show stayed on the cautionary tale bent. Warnings of things veering away from our best interests.

Another member of the burgeoning Wednesday Repertory Company, she invites us to mark our calendars.

Next is our bi-annual showcase for Wednesday Repertory Company (Wedrepco) in October. Always a lot of fun with great original works by our writers and actors. a true group effort that I always look forward to.